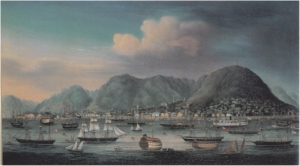 Dr Melanie Bassett is a Faculty Research Fellow at the University of Portsmouth. She manages the PTUC website and social media outputs alongside undertaking her own research on port towns. Her PhD research, 'The Royal Dockyard Worker in Edwardian England: Culture, Leisure and Empire' re-examined the concept of a monolithic imperial identity and tracked the nuances of working-class imperialism. She has worked with Professor Brad Beaven on a number of WW1 projects, including 'Mapping the National Impact of the Jutland Battle: Civic and Community Responses during the First World War' and 'Lest We Forget' in partnership with Portsmouth City Museum, which culminated in a large-scale exhibition that commemorated the ways that Portsmouth and its people experienced the War. Mel previously worked in museums and was employed at Portsmouth City Museum and the Royal Naval Museum. Follow Melanie @melanie_bassett
View all posts by Melanie Bassett →
EXTENDED DEADLINE: Postgraduate Online Workshop Call for Papers: Treaty Port China in World History c.1842-1930